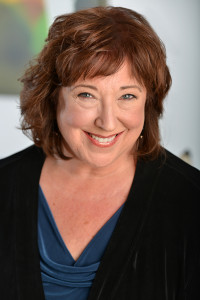 My first stage was my family’s kitchen table when I was two, and since then, my passion for all things acting has only grown. After receiving a bachelor’s degree and teaching certificate in Theater and English at the University of Houston studying with Cecil Pickett and Sidney Berger, I danced for several years with Patsy Swayze’s Houston Jazz Ballet Company. My original love of acting called again, and a boom in demand for voice over talent kept me busy while I hung up my dancing shoes to pursue an on-camera acting career. I became a member of SAG-AFTRA and AEA, serving on the board of SAG-AFTRA for 15 years and as the President of the Houston Local Branch for two terms. In Houston and around Texas, I worked in many commercials, feature films, and tv movies in roles from baseball bat toting bar owner to loving aunt to nosy neighbor.   I established my own professional ISDN voice over studio in 2002, and I work daily with clients all over the world.  Now, since my 3 sons are grown, and with the blessing of my husband, I am now bi-coastal – living & working both in Los Angeles and Texas – seeking more national opportunities! Most recently, I appeared on the hit comedy series, The Middle, and I can be seen on Netflix in the film, A Country Called Home.   Looking forward to more and larger film roles and guest starring and recurring roles on television….and my dream is to be a series regular on a national network tv series that runs for a very long time!